To see the global community of churches and not-for-profit organizations realize success in their ministry and fulfillment for their staff and volunteers through collaborative governance, leadership, and management.

Our Mission is to enable the boards of not-for-profit organizations and churches worldwide to strengthen their structures and processes of governance, leadership and management with The Relationship Model™.

Let’s Beat this Virus at Its Own Game

“COVID 19 has become a real villain. We can’t even sit at a board table together to have a discussion for fear of passing the virus on to one another. We could become ill or even die – for becoming a board member? Our clients are suffering, our staff doesn’t know what to expect next. We can’t travel. Our income is down.

We can make it through this, and I would like to be to be your guide, but we have to do things differently.

For my part I’m going to change my business plan entirely. I’ve been traveling all over the world for the last 20 years. I figure I’ve collected enough pictures vases to fill a dining room. I think I have enough.

Now what I want to do is download my brain to create some short courses and some other articles and tools that will help you raise your governance to a whole new level.

My friends tell me that that I can download my brain onto a thumb drive. Well, I hope they’re wrong, but we’ll see. I’m going to celebrate the 20th anniversary of my company by offering you some deep discounts. If you can picture training a board member for $8 for an average board of 12 include the CEO at no extra cost at all.

That’s the whole purpose of this, I mean business. Let’s go! 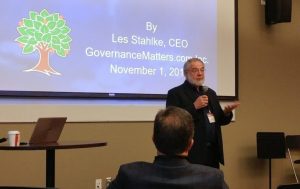 Following six years as a parish pastor in Alberta, Canada, Les Stahlke led in the founding of the Lutheran Association of Missionaries and Pilots (LAMP). During twenty-five years as CEO of LAMP (1970-1995), the organization became an international organization with two boards and expanded to serve people scattered over more than one million square miles of northern Canada and Alaska. Mr. Stahlke acquired an Airline Transport License and a flight instructor’s rating. A licensed pilot, he has logged over 5,000 hours as pilot in command.

In 1995 he accepted a four-year appointment to serve as the Chief Executive of Mission Aviation Fellowship Europe (MAFE), a ten-country consortium made up of members from Italy to Finland. MAFE provides air transport services to missionaries and the national churches in Ethiopia, Chad, Uganda, Kenya, Tanzania, and Madagascar, and initiated ministry in Bangladesh and Mongolia.

During these four years he completed the development of the Relationship Model™ of governance, leadership and management. Following his service with MAF-Europe, Mr. Stahlke formed GovernanceMatters.com Inc. to support the governance needs of not-for-profit organizations and churches worldwide.

The Relationship Model™ is supported by many years of personal observation, research, analysis and leadership experience. Since 1999, Les Stahlke has applied the Relationship Model to churches, faith-based and values-based not-for-profit organizations in North America, Europe, the Middle East and Asia in person and on the Internet. He has travelled extensively, and has supported over 600 not-for-profit organizations and churches in 24 countries.

Mr. Stahlke is the father of four adult children, the grandfather of eleven grandchildren and the great-grandfather of four. His wife of 40 years, Paula, died in 2001. In 2004 he married Judy Bauer, also of Edmonton, where the couple resides. Immigrating to Canada in 1964, he holds dual citizenship in Canada and the United States. In 2010, Dr. Stahlke received an honorary Doctor of Divinity Degree from Concordia Theological Seminary, Edmonton, Alberta.

Price Based Country test mode enabled for testing Cambodia. You should do tests on private browsing mode. Browse in private with Firefox, Chrome and Safari